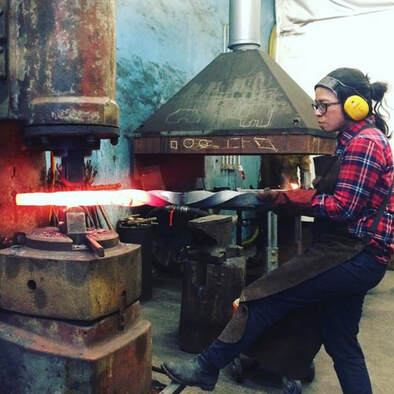 when you are forging, don't forget to close your eyes.
​OU Jiun-You was born in Taipei, Taiwan, currently lives and works in Vienna (AT) and Taipei (TW).

With a social science degree in international relations from National Taiwan University (TW), she started her artistic practices mostly by self-taught in Taiwan since 2008. After working and teaching in the field of metalsmithing for some years, the interests in stone led her to start the MFA study in Hochschule Trier, Idar-Oberstein campus (DE) in 2015, and later on Erasmus exchange in the department of jewellery and blacksmithing, Estonian Academy of Arts (EE) from 2016 to 2017. Since 2018, she has been working as an artist and lecturer in Europe/Taiwan.

The methodologies and working methods of Ou Jiun-You could be unfolded from both anthropological and psychological approaches. As a bricoleur and an incompetent practicer toward individuation, she realizes her thoughts with various media into (wearable) objects and (performative) installations. Since 2020, with more focus back on her own body, she has become interested in the research of self-optimization in a broad sense and has been working on it with texts, voices, site-specific installations, and more.